July 13, 2016
Scientists have produced a detailed computer model of a heart that shows the electrophysiology of congestive heart failure, according to a study published in PLOS Computational Biology.

Congestive heart failure (CHF) is a leading cause of death in the United States.
According to the Centers for Disease Control and Prevention (CDC), around 5.7 million Americans have heart failure.

About half of the people who are diagnosed with this condition die within 5 years of diagnosis.

Heart failure does not mean that the heart has stopped, or will stop, completely. It refers to a condition in which the heart is not able to pump enough blood for the body to function properly. As a result of heart failure, fluid and blood can back up into the lungs, the person may experience tiredness, breathlessness, and edema, or a buildup of fluid in the legs, ankles, and feet.

Heart failure can happen as a result of coronary artery disease, high blood pressure, and diabetes.
It is more likely to affect people over the age of 65 years, and especially those who are overweight. People who have previously had a heart attack are more at risk. It tends to affect men more than women. However, the mechanisms that cause it, including its electrophysiological (EP) mechanisms, are not well understood. It is hoped that the new "virtual heart" could benefit the development of new drugs to treat the disease. 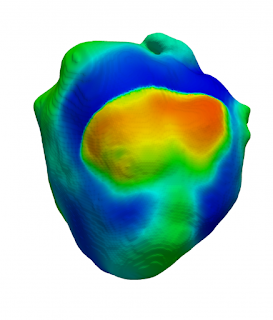 Tweaking an existing model gives insight into heart's workings The researchers, from the University of California-San Diego, CA, modified an existing model of a healthy rabbit heart to create their simulation.

The model is able to simulate small changes in the heart, from the cellular and tissue levels, up to the whole heart.

An electrocardiogram (ECG) is a tool commonly used by doctors use to diagnose heart abnormalities.

The team hopes to use the numerical model they have created to link changes that occur at the cellular and tissue level when a heart fails to a numerically computed ECG. This, they hope, will help to pinpoint what it is that triggers ventricular fibrillation (VF), and to identify the risk of VF.

At the cellular and tissue levels, the model can replicate the heart's reactions to changes in the levels and flow of calcium, sodium, and potassium. It also can take into account the speed at which the ion channels - which take in those ions - function. At the whole-heart level, it can also show what happens in a healthy, working heart as a result of variations in the different critical chemicals and electrophysiologic components.

New insight into VF VF is a common cause of sudden death. During VF, the electrical waves that occur in the heart break up chaotically. When this happens, it affects the timing of the heart's pumping action. The heart can no longer contract and pump blood to the rest of the body.

Using the new model, researchers in the current study found that this fragmentation and loss of coordination can be caused by a slowdown in cellular processes at the top of the heart. This can lead to heart failure. To learn more about the causes of VF in a person with heart failure, the team set up a test that would simulate a person with heart failure performing physical exercise.
The results suggest that a patient with heart failure who experiences a fast heart rate and variable pacing will be more susceptible to VF. This, they say, is because of a newly identified mechanism that blocks conduction.

The researchers have shown that the model can be used to plan a new drug strategy to prevent the type of fibrillation that is associated with heart failure.
With thanks to MNT